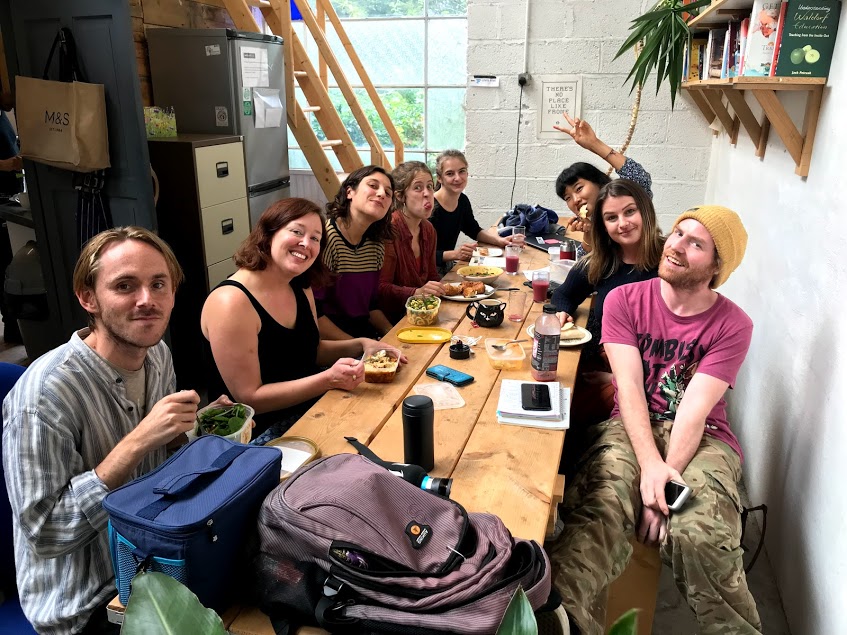 We’ve been joined by our 13th team of Edventure Start-Up Students. They’re sharing their edventure here…

What is this Start-Up project all about?

The Walled Garden at Mells is a small ancient walled garden in the heart of Mells village, Somerset, three miles from Frome. Set in an acre of grounds, the garden is split between a plant nursery and a pretty rambling herbaceous garden with a cafe. The cafe sells cakes and pizza and is open between March and October every year. The plant nursery specialises in cottage garden perennials with a focus on bee and insect friendly plants.

… is to create a community plant nursery propagating and selling perennial plants to fund a program of initiatives, events and workshops that alleviate the health and well-being effects of loneliness, whether as a result of social, economic, geographic or generational isolation. This will include gardening based activities and events for the elderly to improve physical well-being and provide opportunities to socialize and connect; vocational and experiential learning for young adults, especially those with disabilities to improve their mental and physical wellbeing as well as their employability and participation in society; an outdoor learning environment for young children so that intergenerational learning can take place.…

The first week was primarily dedicated to getting to know each other individually and forming as a team, meeting people from the local community in Frome, getting clear on the challenge brief as a team, setting individual goals and intentions for what we want to learn and a take away from the programme and sharing what skills, qualities, resources and interests we are bringing to the group!

At the heart of the week we were set our first team challenge: to plan, organise and deliver a community evening dinner event. Around sharing home-made soup (made by one team group) at the Walled Garden in Mells, locals were invited to come and meet the team with the hope that many would be interested in supporting our project idea in some way, either through volunteering their time and skills, through donating personal resources, offering useful networks and contacts, making suggestions and insights based around their interpretations of the project vision etc.

We introduced ourselves by going around in a circle saying our name, where we had come from and what had led us to making the decision to be here.

We then paired-up and did an ice-breaker exercise where we answered questions on the other person, such as what their favourite film is, what their hobbies are etc. without actually asking them, so essentially guessing the answers to these questions based on our initial impressions of the other person. It was a very humorous way to get to know each other!

We then did a team-building exercise called the “lava river”, which involved getting the whole group to the other side of the building in single-file with the instruction that we had to do so without touching the floor (lava) at any point whilst transporting four full cups of water to the destination, getting a “unicorn” to the destination with two people having to be holding it at all times, leading a blind-folded member of the group and two mute members of the group to the destination (also without them touching the floor) and passing around a large courgette which had to be held by all group members. Once finally at the entrance to the “cave” destination, after losing many to the scorching hot molten lava beneath us (meaning those who fell in had to go to the back of the line), each group member could only enter by first having to answer a unique “password question” and squeezing through a hula-hoop ring without any body parts touching it. It was a great way to break the ice and get us to work as a cohesive team early on. It was lots of fun too!

After the tea break we dedicated time to co-creating a team “manifesto” which was pinned up on the team pin board and which will be used as a reference and guide to refer back to throughout the process.

In the afternoon we all went to the Walled Garden at Mells to meet our “client” Samantha who, very kindly, provided the group with delicious pizza for lunch, baked in the Mells Garden café pizza oven. We spent time listening to her vision and expectations for the project, reading over the project brief in more detail and walking around the gardens to get more of a “ feel “ for the space (i.e. what is already established and what areas need improvement and redevelopment).

At the end of the day, some of the team decided to walk back from Mells to Frome, about a 1.5 hour beautiful walk through woodlands and meadows, alongside rivers and streams and past some ancient buildings nestled in the undergrowth. It was a great bonding experience for those who went on the little adventure and was thoroughly enjoyed by all!

Today’s check-in was done using “Dixit” cards. Each person chose a card to represent how they felt that morning and then shared it, going around in a circle, with the rest of the group. Following this, the team were treated to a building tour at “The Wealsh Mill Hub” (where Edventure has its “base”), and got to explore and understand more about how this co-working space operates.

After the morning break, we did a team exercise called the “River of Life”. We were given 20 minutes to create a visual representation on paper of our individual life stories up until this point, emphasising the significant things that were formative in shaping our directions and paths and which were influential in shaping who we have become as people. We were given 2 minutes each, going around in a circle, to share our stories with the group. This “deep dive” into our personal biographies took a lot of vulnerability and courage for each of us but it, no doubt, helped us to build trusting, open, honest and transparent relationships with each other very early in the team formation process.

After Lunch we all headed up to the amazing “Rye Bakery” in Frome to hear a talk by a very well-known and very well connected and involved community member – Peter McFadden – who spoke about the history of Frome and how it came to be such a thriving community hub.

The morning was spent doing a group activity to practice the “consensus decision making model”. This became useful later on in the day with the process of forming and deciding on our ideas around the Edventure SOUP community event we were hosting in Mells that evening.  During the intense “brainstorming” phase, facilitated by (the very courageous) team member Julia, we definitely went through the classic group process of ‘Forming – Storming – Norming – Performing’, which the Edventure facilitators told us very often happens in groups when they come together to collaborate on a task or project.

Following this, we split off into separate groups for the rest of the day leading up to the evening event (divided into a shopping and soup cooking group / project presentation group / set-up, communication, information-gathering group).

Despite the on and off rain, the SOUP event that evening at the Mells Walled garden was a great success! We had about 20 people turn up from the local community. They were given a presentation about the project vision, a garden tour, a choice of 3 delicious home-made soups and an opportunity to give their feedback , ideas , suggestions and opinions about the project idea in a creative and interactive way!

Getting used to morning check-ins forming an integral part of the daily Edventure culture, the morning kicked off with sharing reflections on the day before, what we felt worked well and what didn’t go so well at the community SOUP event. The “Forming – Storming – Norming – Performing” model helped the group, now with hindsight, to get an understanding on what was happening in the group the day before.

Following this, we set our personal intentions and goals for our time at Edventure, writing them down on a piece of card and “posting” it into a collective “goals” envelope (which is now pinned on our big “project pin board” for us to go back to, so we can remind ourselves and each other of the “bigger” reason we are doing this).  The Edventure facilitators highlighted that the key to learning how to be an engaged and ‘active learner’, to getting the most out of the experience, is by setting SMART (specific, measurable, achieveable, relevant, time-bound) GOALS.

We spent the later part of the morning sitting outside the Edventure hub on the grass and pairing – up to identify our personal skills, qualities, networks and resources that we are individually bringing to the team.

The afternoon was spent delegating individual roles for next week such as who would take on the responsibility of being the “team wellbeing facilitator”, the “team project facilitator”, the “process documenter” (blog writer), the “team space fairy” (keeping our learning and working environment clean and tidy) – amongst many others.

Finally, we were treated to a visit and talk by Cassie, a previous Edventure Start-up programme participant who went on to being employed by Edventure and continuing to run the “Make Shed” initiative! She shared her “survival tips” on how best to get through the roller-coaster Start-up project process and how to maximise this unique 10 week opportunity!

What the team said about their personal achievements in Week 1 …

“This week I allowed myself to be really vulnerable with a new group of people, and let myself see them too. I accepted and embraced the triggers and decided to work with them towards the greater goal.”

“I set myself quite a specific goal, to build upon my practical garden design skills so I can challenge myself and gain professional experience of combining and creating and credible design solutions”.

“My personal achievements this week include finding my feet in a new and alien place; overcoming my instinct to run away when the course got too intense; and reaching my fundraising target”.

“I managed not to rub people up the wrong way”.

One achievement that I took away from week one is that I feel like I’ve made a new “tribe” of friends which has been formed, in my view, in two main ways:

1. Through “diving deep” into our own personal stories and biographies and having the courage to be vulnerable in sharing them with one another

2. Through working together as a team to rise to the challenge of organising and delivering a community event in a very short space of time – and it being, overall, a good success !

“Making new friends for this week”.

“A personal achievement… Keeping my head under pressure! Also, a reflection, feedback to self: I should have sent everyone out of the room to have a 15 minute break and get themselves tea/coffee. That would have given me a chance to think through how to approach the session without everyone else around. Lesson learned!”

“This week I have achieved meeting lots of excellent new people”.